130 participants in the I ASPADO International Tournament 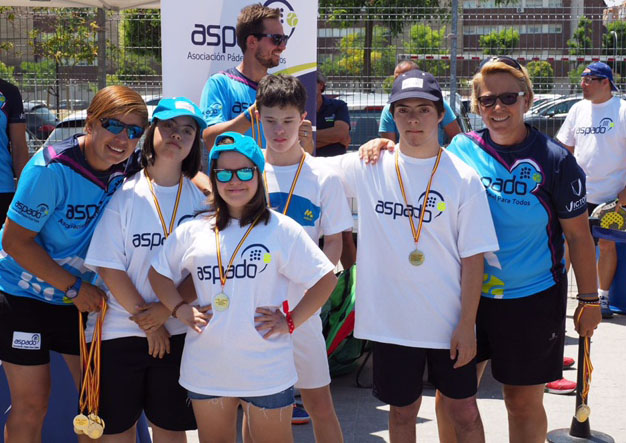 With the participation of 130 players, the first International Adapted Paddle Tournament was held in the standing mode organized by ASPADO and which had the endorsement of the International Paddle Federation (FIP).

For the first time this traditional tournament organized by ASPADO had the presence of four Portuguese players, which gave the international character to this event, which was also attended by representatives of Andalusia, Palma de Mallorca, Calatayud and Valencia. In total 130 players who participated in the different categories and where in addition to the competition they could enjoy walks, recreational activities and a great closing with the awards ceremony.

The test took place on the tracks of the Valdebernardo Sports Center and the president of ASPADO, Kiki de la Rocha, was more than proud "not only for the work done by all our monitors and the support we have had, but also for this great step that we have found the tournament when it was declared International by the FIP, with Portuguese players and we are sure that in the coming years participants of other nationalities will join ”.

In addition to the students of the ASPADO School in the Community of Madrid, the following attended: The tournament took place in different stages. On Friday the tests were carried out in children's categories in sports skills and adapted under.

Saturday was the turn for the adults in sports skills, adapted low and adapted high. That day, a meal was held with all the participating delegations and in the afternoon there was a visit to the Europa Park in Torrejón de Ardoz.

During the last day, on Sunday, the competition and subsequent trophy delivery to the winners in each discipline took place.

From ASPADO we want to thank the support of all the companies and private institutions that collaborated for the realization of this tournament that grows year after year and that shows the great work that is done in adapted paddle tennis.